I hope all is well for you and your family.

My name is Andrew Hanson, the founder and Chairman of MATTOO. MATTOO’s journey started when I first heard of sex trafficking working in a Mexican orphanage at the age of 19 in the summer of 1998. When I arrived back at college in Chicago, I contacted numerous anti-trafficking nonprofits to explore how I could assist in their cause. Each nonprofit, however, required one of two criteria to be met and asked: “Are you a female?” or “Are you a lawyer?” Both of which I was not. Believing I had no place in this movement, I focused my volunteer efforts instead on the ubiquitous needs surrounding me; assisting the homeless and low-income families in the Cabrini Green ghetto in Chicago, IL and later in downtown Minneapolis, MN.

In 2005, I moved to Washington, DC for business and again pursued avenues in which to participate in the anti-trafficking movement. My experience in DC was, unfortunately, similar to that in Chicago – a movement predominantly made up of women with the exception of a few male lawyers.

Eventually, as I was studying for an MPP degree in my home state of Minnesota, I read of the atrocities of the child sex-slave markets in India and became infuriated and again, for the third time, contacted anti-trafficking nonprofits in the area I was living in 2009. One nonprofit responded positively mentioning it needed public policy expertise.

As I began to get quickly involved in this movement, my previous experiences were affirmed. The absence of men in this movement was astounding, and when I was told that no organization existed to involve men – well, I was not surprised. No longer seeing human trafficking solely through books but by meeting prostituted and trafficked victims escalated my commitment to help eradicate modern day slavery. So, instead of waiting for an organization to exist, I decided to create MATTOO.

Since then, an amazingly brilliant and dedicated team has been assembled;  personal sacrifices have been made; and pioneering initiatives are being implemented. As such, I kindly ask you to share MATTOO’s message and to consider any financial support you could invest in our efforts to help us end modern-day slavery in our lifetime.

Until that day and with best wishes, 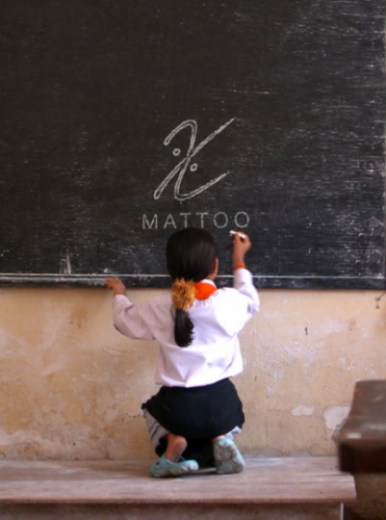 From a young age, I always desired to bring order to the chaos around me. So, when I first heard of the meaning behind the ying-yang symbol – balance and order, I immediately took a liking to it.

Years later, sitting in my college Greek class over a decade ago, I came across the Greek word, χάος, which stands for chaos. So there while sitting in Greek class, I took the first letter of the greek word chaos – “χ” – and placed the two dots representing the ying-yang, on the left and right of the chi to create a symbol that represented not only “balance” and “chaos,” but a symbol that represents actively bringing order to chaos.

Ever since that day, I have included this symbol under my signature and as my own personal mark. As I experimented with various logos for MATTOO, I could not find one fully representing what I desired to express. And as I believe, human trafficking is one of the worse forms of crime – or chaos – in the world, I decided to use this symbol for MATTOO’s logo.

Furthermore, as there is no logo under which anti-human trafficking organizations are able to stand beneath, my hope is that this symbol will be recognized around the world as a sign of freedom for those who are being oppressed generally, and more specifically for victims of trafficking.