How Chris Telfer got involved with MATTOO… and how you can too.

I met Andrew Hanson in 2011 and instantly gravitated towards his heart to involve men in the fight against sex-trafficking.

As a man and a husband, this very subject gnaws at the core of me. How can so many women and children be forced into this hideous industry and men not stand up and do something about it? As Andrew shared with me his own such experiences, many organizations do not involve men because males are most often the perpetrators and clients. They are the ones who mostly fuel the industry.

I asked myself, How can I, as a man, get involved in this fight?

I knew instantly, “I am a MATTOO”.

God has given me a voice and a passion for music. What could be better than using this gift God has given me to join in the fight with MATTOO? I approached Andrew immediately and asked if I could write a song for him. You see, I believe that every movement needs an anthem. For example, Martin Luther King Jr.’s , “I Have A Dream” speech serves as an anthem for the civil rights movement in the 1960s. So, I set out to write a song for MATTOO; a song that would stir the hearts of men, that would cause people to join together in the battle to end human trafficking in our generation. 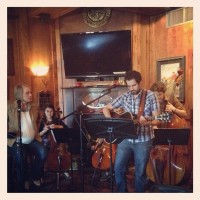 I wrote the song in the weeks that followed. I’m not going to say it was easy, but it wasn’t hard either. Rather, it was a weighty honor. The gravity of the movement I had become a part of was felt in each lyric and every note. It’s nearly 6 months later now and that little song I wrote in our living room in Spain is now the feature track on a 6 song EP.

I believe this is one way we can all get involved. Get something. Give something.

Share the message with your family, your friends and your neighbors. Let’s all band together to see the end of human trafficking. – Chris Telfer